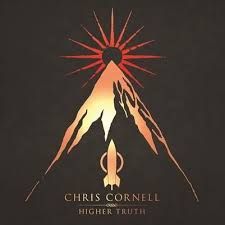 I’m in my overpriced, moldy Fremont living room listening to the hazy, warm sounds of The Cult’s ‘Love’ album on vinyl, trying to decide what you tell you about last night. Damn. What a show.

After my recent move to Seattle, I found out Chris Cornell was going to playing a solo acoustic gig at Benaroya Hall, in the heart of downtown. Since I was on the mailing list (and if you’re a fan you probably should be on it), I got the early box office deal and splurged on 3rd row center.

Now I’ve seen Cornell perform with Audioslave a few times, mainly due to my ex-boyfriend David, aka ‘the Minneapolis Mensch’. For many years, he was a sound guy/tour manager for Chevelle; I went to a few shows the two bands did together back in the day. I really dug Cornell’s smoky, multi-octave vocals, so I started listening to a shitload of Soundgarden, digging beyond the few hits I’d heard on the radio as a kid. Truthfully, it turned me into one of those annoyingly un-hip post-band-breakup fans. Looking-forward-to-the-reunion-‘cause-I-never-saw-them-live-before kind of deal. I apologize profusely for any pain this may cause real Soundgarden fans.

Fast forward {x?} years and I’m in Seattle, stoked about seeing Cornell’s solo show, strolling through a HUGE CLOUD OF POT SMOKE—some of which I may or may not be responsible for—and into Benaroya Hall. Some ridiculously nice older-lady ushers point the way to the “good seats” and I settled my leather dress-dressed self into the roomy third row, a mere 20 feet from the stage. 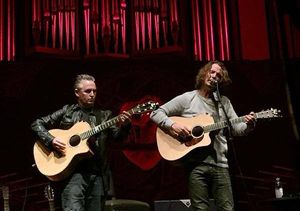 At this point, if I were a Chris Cornell fan-freak, I would launch into some annoyingly-detailed play-by-play, citing every goddamn thing that happened during his set, including analysis of each song he played, the exact order he played the songs and how Cornell kinda-sorta clammed halfway through this one particular song but it was still SO amazing and blah, blah, fucking blah.

Well, I’m not going to do that.  It sounds like a fairly tedious post for someone else to write. Probably some pale bearded hetero-man, who happens to have Mr. Cornell on his ‘allowed-to-be-gay-for’ list. Actually, if you must know some of these things, you might want to reference Dusty Henry's review on Consequence of Sound; it's detailed but not tedious.

I CAN tell you this: the return of this Rain City son to a sold-out crowd of fans and friends was a beautiful thing to experience. He played almost everything I wanted to hear (except Mailman) and almost everything EVERYONE wanted to hear (except Outshined) because HE PLAYED FOR 3 MOTHERFUCKING HOURS, much of it solo. He played and played and sang and sang until some of the 40 and 50-somethings who had kids waiting at home with teenager babysitters had to leave.  And then he did an encore.

SO instead of lulling you to sleep with a detailed analysis of the drop-D or drop-(insert favorite here) tunings on Cornell’s 9 or 10 guitars, in a few days I’ll publish a follow-up piece called Masters of Performance: Chris Cornell, Part 2 – 7 Ways to Make Your Next Live Performance Shine. Maybe there will be 10 things if I get all Irish about it. I think we can all benefit from the interesting creative decisions and killer performance skills that went into making last night’s show a memorable experience.

In the meantime, I’m packing my things. Moving day looms once again, like the approaching clouds of winter.