Jesus isn’t a Dick, So Keep Him Out of My Vagina. 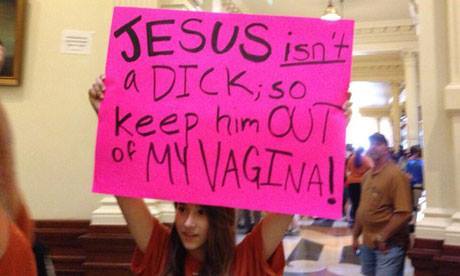 Today I saw my favorite pro-choice sign so far: it was created by a 14-year old Austin, Texas gal named Tuesday Cain:

The sign read: “Jesus isn’t a Dick, So Keep Him Out of My Vagina”.

It's caused a bit of hub-bub and naturally it went viral. Some cowardly members of the religious right have attacked this young girl, calling her a slut and worse. You can read the whole story here.

Cain’s sign made me laugh this morning—you know how I love irreverent humor—but has a very serious side to it, one that inspired me to share this post. It’s true. Jesus ISN’T a dick. But for awhile I thought he was.

I was baptized Catholic and raised Pentecostal. I spent a considerable amount of time in church or engaged in religious activities: studying the Bible, memorizing scripture, singing about Jesus, practicing the “gifts of the spirit”—prophesying and speaking in tongues. I felt a deep connection with the story of Christ, how much he loved others and his ultimate sacrifice. It’s a story that’s very easy to connect to. In our heart of hearts, we are all looking for unconditional love.

Starting at age 17, I went through three periods of rebellion; a trio of rumspringa, so to speak. At the end of these backsliding stints, I realized many of the “facts” I had learned as a child didn’t add up. I started seeing the Pentecostal church as a glorified pyramid scheme, filled with tons of rules and judgment; taught through musical theatre, enforced through fear. Financed by people like me.

When I went to college, I met people from all cultures, backgrounds and religions and started seeing life as expansive, not restrictive. As full color, not black and white. I broadened my ideas about life and about God. As my newborn eyes began to open, I suddenly resented being told how to interpret the Bible, who to date, how much money to give, who I should vote for. Not being able to make my own moral decisions. Eventually I became resentful about my intensive religious upbringing (i.e. brainwashing) and I abandoned my faith in Jesus and my religion. 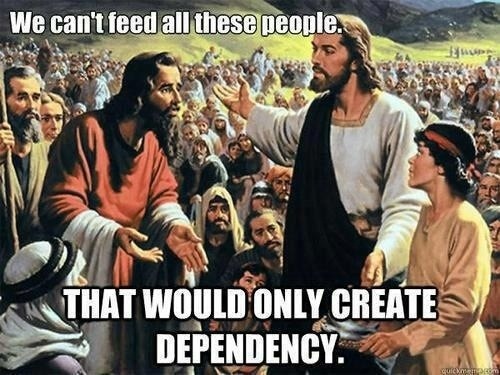 But the pendulum has started its reverse swing. Although I often identify with atheists and firmly believe in the separation of church and state, I’ve become comfortable saying I DON’T KNOW whether or not god exists. Historically, we’re quite ignorant, so how could we say one way or the other? And the concept of god is ever-changing.

I also feel comfortable saying I DON’T KNOW if Jesus was a real person or not; there is historical evidence, but then again we know how corrupt the Catholic church was, and continues to be. To me, it no longer matters if he was the exact person of the scriptures; any way you slice it, the teachings of Christ are mind-numbingly beautiful. My attitude towards Jesus has softened. He wasn’t a dick. It’s not his fault many of his followers are dicks.

It’s ironic that the extreme right uses Jesus as their icon, their official spokesman, because if he were alive today, he wouldn’t have anything to do with them. The only people he seemed to hate were religious hypocrites. When he said crazy stuff like it’s impossible for rich people to get into heaven and threw businessmen out on their asses for making money off religion, Jesus really pissed off the religious conservatives. Jesus was the antithesis of religion and its laws. He claimed a higher law, one of radical love.

Many people intuitively understood the gospel of love and flocked to him; by making Jesus a messiah, they made him a threat. So religious and political forces conspired to murder him in the name of God and State. They crucified the Outlaw of Love. Nicely played, religious folk. Nicely played.

And that’s the angle of the story that gets missed: if you piss off well-to-do religious folks who have strong political connections (inevitably they do), you can end up in a world of pain. Or dead. It doesn’t matter their race, creed or religion. It’s about control. Jesus was in the way, at least he was when he was alive.

Jesus wasn’t a dick. He gave WITHOUT trying to control, which is the very definition of love. He didn’t go around preaching fire and brimstone, picketing soliders’ funerals, telling gay people they were going to hell or condemning women for having sex or an abortion. Abortion has been practiced since the very beginning; he never even mentioned it, just like he didn’t mention homosexuality. No, he wasn’t a dick. He emanated love at all times. People were changed in the presence of that love. He fed the hungry. Clothed the poor. Extended mercy to lawbreakers. Healed the sick. Willingly gave his life for others.

His life was a supreme example of love and peace; exactly the opposite of today’s so-called Church. And they wonder why “the world” makes fun of Jesus…it’s because his so-called followers have made a mockery of him, by loudly hating in Jesus’ name.

Seriously, we could all use a REAL Come-to-Jesus Meeting. And that meeting should dissolve religion in favor of love. If the collusion between religious powers-that-be and political powers-that-be killed Jesus—one of the most loving people ever written about—aren’t they likely to destroy us all?