8 Reasons to be Happy You’re Broke 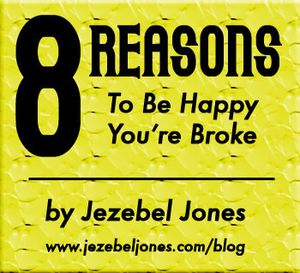 Since moving to Texas last fall, I’ve experienced varying shades of broke, ranging from semi-broke to near flat broke. News Flash! Being a indie musician doesn’t always pay the bills. And while I love Austin, living here isn’t cheap.

It’s been humbling to revert back to my Raman-noodle eating college existence: struggling to find employment, not knowing how I’d pay the bills, treasure-hunting for spare change so I could do laundry or drink some beer on the weekend.

But finally, Lady Luck was on my side; tomorrow I start a new day job that pays a living wage. Now, on the eve of my “Freedom from Broke”, I’m reminiscing about the good things that have come from this lean period.

To those who are suffering financial hardship and/or joblessness, I certainly don’t mean to trivialize your pain. Mostly, I wrote this list as a reflective exercise for myself: lessons to keep in mind, whether I’m broke or not.


1. It improves your spending/budgeting habits.

It’s damned easy to be wasteful with money if you’re not worried about it; just look at the irresponsible spending of our politicians, bankers and CEOs. However, when you’re living paycheck to paycheck—or don’t have a paycheck—you’re forced to look at, prioritize and cut your expenses.

This week alone I cancelled an online subscription I was barely using, got my bank to reverse an overdraft charge and found a mistake on my grocery receipt. I’ve had to stop eating out and drastically cut down on drinking when I’m socializing at the bars or playing a show.

Unless you’re on the Forbes Billionaire List, watching your pennies is a good habit, but sadly some of us don’t remember to practice it until we’re forced to.

Delaying your gratification is not really a staple of the American culture. We need more, we need it supersized and most importantly we need it NOW. But these thinly disguised pursuits aren’t very healthy for the soul.

Spending money is a lot like dating. Sure that hot guy at the gym is texting a late night invitation to “hang out”, but it’s not the worst thing in the world to wait a little bit and see if he’s actually worthy of your awesome (insert best sex skill here). Delaying gratification allows you to regain control; suddenly you get pickier about—well—who gets the money, so to speak. And in the interim, you develop patience and a bit more respect for that which you waited or saved for.


3. It forces you to be more creative.

When money’s tight or nonexistent everything becomes a DIY project. Not only is this a chance to expand your skills and creativity, experimenting is fun! Modify a dress or t-shirt you never wear anyway, learn how to change your own oil, cut & color your hair at home. Instead spending money on overpriced drinks at the club, invite friends over for cozy BYOB record-listening night or host a small house concert party.

When you’re broke it’s suddenly a hell of a lot easier to part with that designer handbag you haven’t used for two years, or that guitar—the least favorite of 7—that’s collecting dust in your practice space. Craiglist it and make a little cash! Or trade it for something you DO need/want but can’t afford.

This is also a great time to give stuff away. Many of us have plenty of things lying around that aren’t worth selling, but don’t justify keeping. Giving these items to a worthy organization not only boosts your spirits but makes you grateful for what you do have.


5. It shows you who your friends are...and what they’re made of.

When times are tough, financially or otherwise, some friends will rise to the occasion and sadly, many will not. This can be downright painful, but use it as a gauge. They may not be comfortable giving or lending you money, but people you consider close friends should be supportive in other ways. If they aren’t supportive, use this opportunity to cut them loose and invest in higher quality friends.


6. It gives you permission to receive.

We’ve all heard the old adage “it’s better to give than to receive”. It’s also a lot EASIER for some of us to give then receive. Practice being a gracious receiver and don’t feel guilty about it. Accepting help is humbling, and makes the other party feel good.

Just say “thank-you” already! And vow to pass it on when your luck turns.


7. It enables you to focus on things that matter. 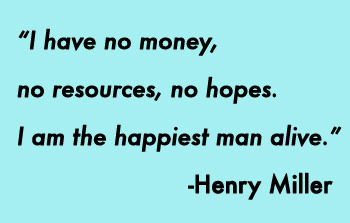 Shopping, for instance, tends to leave people wanting more; it doesn’t satisfy the deeper needs of our soul. Instead, rediscover some of your childhood passions. Go for a run. Keep a journal of your thoughts, dreams, fears. Write a letter or call a long lost friend. Volunteer at your local animal shelter. Use this time of financial hardship to better yourself and connect with those you love.

Yeah, it often sucks to be broke. But you know what sucks worse? Spending 50+ hours a week at a job you absolutely hate. And many of us keep doing it because we fear losing our comfortable lifestyle.

If you know you can get by—and even thrive—when things are tight, it frees you in many ways. It makes it easier to quit that awful job and go back to school. Or take a gamble and start that company you’ve been dreaming about. Or indulge your passion to do art or music full time. These risks can pay off in terms of greater peace, happiness and even financial success.

Bravery is often easier when you have nothing left to lose.