Note to the reader: I wasn't gonna publish this post outside my facebook friend circle, mostly because I've recently made peace with my born-again Christian folks and was worried about them reading it. But I've been challenged to live a more honest life, be who I am and not be ashamed. Called to be more vulnerable and share some of the adventures of my (sometimes) adventurous life. Sure, sometimes I take liberties and perhaps exaggerate here and there, as any Texas-based storyteller might.  But I'm no longer willing to censor myself for others...nor apologize for my "wicked ways", so here it is...

Last night was insane. Bussed it to a local rock club. Oh my vengeful god, the band sucked. The drummer was particularly ludicrous; apparently he spends all his practice time tossing his sticks and making up fancy "I’m-such-a-badass-rocker" moves and no time on actually keeping time. 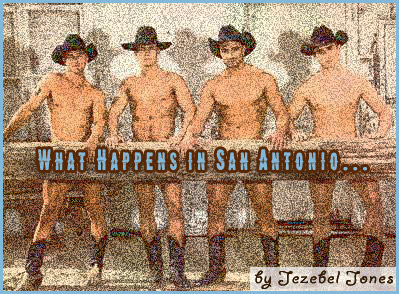 After a few truly terrible songs, I walked to a nearby convenience store looking to kill time before the next band. On the way back I noticed a bar with rainbow lights called The Annex and thought, "what the hell..." You know the scene from those old westerns. Stranger walks into the saloon. Entire room goes quiet as everyone stares at the stranger. Then everybody goes back to what they were doing but that uneasy feeling still lingers in the air. There was literally only one other woman in the place.Should I even be here? Did I break some kind of unwritten SA gay code? So I flat out asked the adorable, husky man boy to my right. Within minutes I met all his friends and we got to know each other over drinks and lots of laughs. Soon Eddie and his pals had me following them to another bar with rainbow lights: one that featured male strippers. OH SNAP these strippers were freakin’ hot. AMAZING bodies and faces, excellent erotic dancing skills. My new gay friend-pack thought it was great fun to call them over and then shove dollar bills in my hand and have me tip the dancers. (People see me as wild--and I can be sometimes--but I’m still a bit of a modest Catholic school girl). I was titillated and embarrassed and being a good sport about it as these smokin' guys pummeled my face with their...errrr...packages.Let’s just say they weren’t shy about earning those dollar bills. Let’s just say at least one of the hot dancers was definitely NOT gay. Let’s just say some of events that happened shortly afterwards are not safe for work, or my parents or impressionable children but will provide fabulous fodder for my unauthorized biography.Let’s just say what happens in San Antonio stays in San Antonio.